The development of cryogenic treatments has been more supported on the empirical results than in the theoretical knowledge of their fundamentals.

Science has always had difficulties to explain the important changes that many materials show after having being exposed to extremely low temperatures. This explains why these processes have been often sorrounded by certain degree of skepticism.

This lack of knowledge is, probably, one of the main causes of the delay in the development of this technology in European industry. However, given the indisputable evidence of the results, the research efforts have increased noticeably in recent years. A growing number of universities and research organizations have been involved worldwide and, nowadays, the microstructural mechanisms underlying behind this technology are better understood. In any case, it is an arduous and costly task given the large number of materials and applications in which cryogenic treatments are used with good results.

But, what happens in the materials when they are subjected to very low temperatures? Although there still are some unsolved questions, some metallurgical fundamentals are fairly well known. In steels, for example, the low temperatures promote the transformation of residual austenite into martensite, a harder and more resistant phase. It has also been observed that the precipitation of very fine secondary carbides is increased, resulting in more homogeneous structures that perform better in most situations.

Certainly, in many materials it is not possible to speak about martensite or carbides, although other similar phenomena could be considered. Some theories point to changes in the microcrystalline structure because, theoretically, the crystals would reach an ideal state at absolute zero (approximately -273°C). When the temperature lowers, the microstructures would tend to be rearranged, resulting in finer grains and removing small defects and dislocations. Consequently, a material with an improved structure would be obtained, resulting in an improved in-service behaviour.

It seems difficult to assume that microstructural changes can occur at cryogenic temperatures but keep in mind, for instance, the superconductivity phenomena generated in many materials when the temperatures approach absolute zero. Moreover, it must be noticed that, due to the volumetric contractions caused by the pronounced thermal drop produced during these processes, significant amounts of strain energy can also be generated. 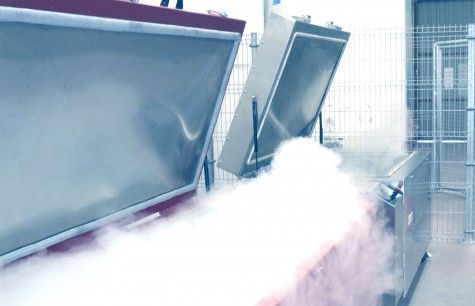 In any case, one should not make the mistake of considering cryogenic treatments individually, since their effects are strongly influenced by very diverse factors. Indeed, it is obvious the decisive impact of other heat or thermochemical treatments previously applied to the material, as well as the influence of other processes performed later. Therefore, despite the significant progress made in the knowledge of the theroretical fundamentals of this technology, the empiric analyses still play a crucial role when deciding whether it is advantageous or not to use cryogenic treatment in a specific application, and how to implement them in practice.